We woke up early in Vienna and had Austrian “Geld Kugeln” cereal (or “Gold Balls”, coincidentally also Tom’s new nickname) for breakfast. We started the day by taking the car to Midas to get it inspected. Katie and Mandi were extremely helpful and did most of the speaking to the mechanics for us. What took them a few minutes might have taken us an hour to translate. The mechanics found that the front left wheel was dented, presumably from driving into the ditch in England. We got it repaired and purchased a full-size replacement tire (which we hopefully won’t need). 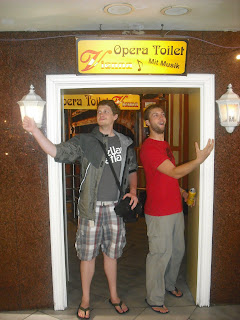 After retrieving the car, we took Rick Steve’s walking tour of central Vienna past many of the top sites, including the Opera house and St. Stephen’s Cathedral. Most importantly, we visited a subway bathroom next to the Opera House which played Opera music to you as you did your business. We deviated slightly from Rick's tour at Katie’s suggestion to visit the oldest church in Vienna from circa 1100 and to visit Cafe Hawelka, a typical Viennese cafe with excellent coffee, fantastic apricot cake, mediocre topfenstrudel, and famously poor service. The walls are lined with art given to the shop by poor local artists in exchange for caffeine. We found time to do some shopping for camera equipment, ridiculous Freud-esque sunglasses, and extra underwear for the trip ahead. This was also a great time to stroll through Vienna with our new absurd glasses, feeling like true Austrian locals. We had a great homemade dinner of eggs, salad, and pretzels with Katie and Mandi, then took a short stroll through the film festival in front of City Hall. Strangely, the only thing showing was an American acapella group, and combined with some beer and our absurd glasses we were having an amazing, albeit random, experience in Vienna. The following day, team Wien (Byron, Michael, Thomas, and Katie) decided to take a hike in the Vienna woods or “Wiener Wald” which surround Vienna. We took a tram to the outskirts of Vienna and took a long hike along the path which alternated between residential areas and dirt paths. The ground was pretty muddy and we saw lots of slugs. It was actually a little nerve-racking trying not to step on them. Viennese hiking routes have a lot of pubs and restaurants which pop up in the middle of the hike, a concept definitely good enough to be stolen by the US and claimed as its own. It seems like you’re in the middle of nowhere for a while and then you randomly find a pub or wine garden. We stopped our hike at a wine garden or “Heuriger” which overlooked Vienna from the top of a hill. We stayed for a few hours (time really flew by, we were having such a good time) and had lots of excellent wine, cheese spreads, and apple strudel. We even sang some songs with the locals, to the disapproval of the employees. 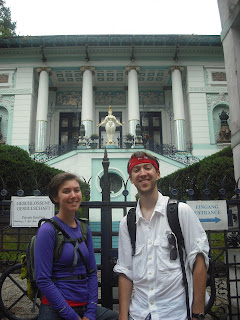 That night, Team Praha (Prague) and team Wien (Vienna) reunited at the Team Prague’s hostel. Team Prahe met two guys from Bosnia (Faya I and Faya II) who were helpful in finding the hostel, so we all decided to go out to a bar and have a drink with them. The following day was spent exploring the city. Team Praha explored the city while Team Wien slept in (recovering from the previous day), but we all met up after to go to the Vienna Treasury. This museum houses many of the historical relics collected and commissioned by the Austrian royalty over its centuries of power. There were jewel encrusted crowns, every conceivable depiction of Jesus, ancient finely crafted clothing, along with hundreds of other priceless pieces. After the treasury, we decided to go to a local brewery, with great beer and better food. The following day we had to leave Vienna for Romania after a depressing goodbye to our amazing hosts Katie and Mandi. Vienna was a great town to see, but like very city we've visited, we left with the impression that there was much more to see and do. Unfortunately, this trip isn't a vacation, it's a journey!
Posted by Unknown at 12:08 AM