The goal for Tuesday was to get to a concert that evening by a band called Kaleo, who put on an incredible concert at Iceland Airwaves. Seeing them play at the Blue Lagoon probably helped them out, but nevertheless we wanted to see them again. We showed up disappointed, the lead singer/rhythm guitarist broke his finger and couldn't play, so we made the most of the situation and watched some of the opener. They turned out to be a folk-blues band and could have easily been from either downtown San Francisco or Kentucky, except the bassist who looked like he was plucked straight from a death metal band.

We left and headed to Zeitgeist, one of those incredible bars in San Francisco with a good enough beer selection to overlook the terrible service. My enthusiastic attempt to take a photo of their taps was quickly shot down when a bartender told me no pictures were allowed.

We concocted a plan over beers. The following day, Robert would be "sick", we'd rent a car, and then drive to Russian River and back. This would mean I'd basically lose a day of travelling North, and although I knew I would end up stuck in some cities for a couple days to rest/recover/seek medical help, I didn't quite think it would be after only 400 miles of progress. On the other hand, if you've had any Russian River beers, it might be easier to understand our logic.


Wednesday started as most days should, with breakfast burritos at Los Fauralito. My stomach won the battle against the burrito, but the burrito would win the war. We then fruitlessly tried to find a parking spot for the Miata before deciding to just park it in Robert's driveway. Obviously driving around San Francisco in a Miata and a rental car leads to reckless shenanigans. Some of the steepest streets have a flat section at each intersection, creating a perfect opportunity to catch some air if you hit it at the right speed. Too slow, and you'd not get any air, but too fast and my car's out of commission for the trip. The angular difference between the jump and the landing zone also made me think that there's no possibility the car would land "nicely". I also discovered committing to getting air takes huger balls than I possess, and while I think I may have gotten airborne on my third attempt, I also got within a few feet of an oncoming car. It was time to booboo before more responsible adults ended our shenanigans with hefty fines/jailtime.

Step two of the plan required picking up Robert's girlfriend Meghan, and step three was head to Russian River. Along the way, we took some great pictures of the Gold Gate Bridge, which is much larger than I thought it would be, I've only seen it from a distance.


Russian River's beer was exactly as good as I expected, and I left with three bottles and enough mental impages of Pliny the Elder crates for future... purposes. Our last step was heading on a hike, through some enormous redwoods in Armstrong Redwoods State National Reserve. It was exactly what I needed after eating WAY too many burritos with Robert. Yogi found every opportunity to jump in a river or lake. After that we sped back, I met up with a college friend; we went out to dinner together before I headed back to Robert's and collapsed on his couch.

I also loaded up on gas, tracking my mileage a little more carefully shows a not great, probably-from-racing-around-San-Fran 24 mpg. That said, I don't plan on driving slowly up the coast either, so we'll see how it goes.

I had stopped at Petaluma with the intention of going to Lagunitas, but unfortunately they were closed for another 3 hours, an unacceptable delay in the "schedule", so I chose to move on to the coast. Fairly quickly I was in the stereotypical picturesque rolling hills of cows and vineyards before getting to Bodega Bay, and stopping at a deli. About 20 bikers showed up after I ordered a sandwich and picked up some of their homemade sausage. They quickly took interest in my race car/expedition vehicle, and the bike on the back of it. They told me about a road called Willow Creek Road, which follows its namesake, and starts just before the Russian River. 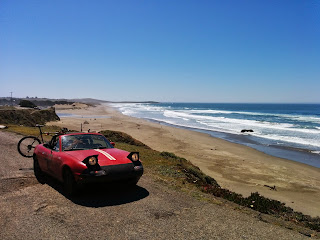 I stopped there at their recommendation, and it was an incredible bike ride. A roughly paved road gave way to a dirt trail, which led to a single track that took me up into the ridges above the Russian River. There were some enormous Redwoods, panoramic views, overgrown meadows, pretty much everything a bike rider could ask for. I was also loving my new pedals, they force me to commit to some hills by fear of falling over when I stop, and give me a little bit more power to get up them. On my way back through a deep puddle, probably the muddiest of the trip, I hit some deep mud and just a tenth of a second before totally falling into the puddle of mud I was able to unclip and avert disaster. I was still covered in mud from the knee down, as was Yogi from the neck down. I used my sacrificial towel to clean him off as best I can before making it to our bathing spot, the Russian River.


I wade in about waist high, crack open a Pliny the Elder, and have a Russian River beer in the Russian River. I went for a quick swim after, wondering what Yogi would do considering I didn't think he could swim. His last experience at a friend's house in Pasadena resulted in him clinging to me out of sheer terror, not really swimming as much as he was clawing to me for his life. As I swam out, he barked a few times before he ACTUALLY SWAM OUT TOWARDS ME! It was still out of terror that I was leaving him or would drown, but it was still the first time he ever swam. He was probably confused that in this moment of total fear for him I was over joyed he was swimming, and after lifting him out of the water for a bit, he swam back to shore. He kept coming out to visit and returning, hopefully with less and less fear each time. 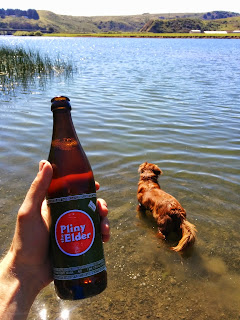 After drying us off I left for Fork Bragg, my goal for the day. The coastal views were fantastic but I didn't leave myself a lot of time to enjoy them. I was hoping to find camping spots at around 3 PM every day but I needed to make it to Fort Bragg to achieve my mileage goal. I arrived well past my deadline at around 5:45, and as I was leaving town to find a camping spot, I saw North Coast Brewing! I had thought it was in Eureka, another couple hours North, but I was clearly wrong. Screw my deadline, I needed to stop here.

It also gave me an opportunity to call Boris, who's starting a UAV company. I'm going to be doing some CAD work on the road for him, mostly for promotional purposes. I had a quick flight of beer and talked to some guys at the bar. Just North they recommended a campsite, MacKerricher State Park, and even a way of getting in without paying a fee. I left with some Old Rasputin and Old Stock Ale, and made it to the site. They were spot on in their recommendation, I set up my campsite right next to the beach before heading out to watch the sunset. The beach is actually a black sand beach, and the waves in the distance over the rocks made for an epic view.


Coming back to campsite, I decided to make a more elaborate meal for myself. I made Mac and Cheese with some added blue cheese and the habanero chicken sausage I got at the deli earlier. It was exactly as good as it sounds, and after cleaning up a bit I collapsed into my sleeping bag and called it a day.
Posted by Unknown at 9:57 AM